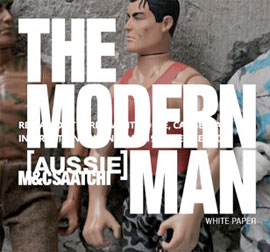 The study is the result of eight months of one-to-one interviews with 140 men. Seventy of who are an assortment of high profile leaders from media and marketing*, business, military, academia, sport and philanthropy. The other 70 were drawn from everyday men from all over Australia.

Stepping around the feminist minefield that stops academics, politicians and everyday men from saying what they really think, this research says what every man is thinking. Through their words and perceptions the Modern (aussie) Man White paper was released as part of the Men’s Strategic roundtable held at parliament house, Canberra on international Men’s Day, 19th November 2013.

By identifying the perceptions of a significant sample and cross-section of australian men, the Modern (aussie) Man White paper has done what few have dared; given men back a personal gender voice to self-profile and share perceptions with exceptionally raw and self-effacing honesty.

the Modern (aussie) Man White paper aimed to draw a line under historic truths and modern day stereotyping; painting a new portrait of our nation’s males and their perceptions of masculinity, men’s roles and feminism. the reality is encouraging. The majority of australian men have evolved.

Based on the findings in this research, we believe that that the majority of australian men have strength of character, emotional intuition and traditional values grounded in respect, equality, humour, friendship, elementariness and most importantly family. they are not emasculated. essentially, australian men are an exemplary archetype of strong and authentic masculinity in the 21st century.