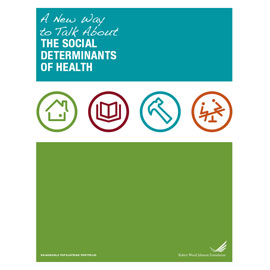 The RWJF invested a significant level of research and development of a framework for communicating what the Social Determinants Of Health approach means to everyday Americans. It serves as a useful, ungendered guide to developing a communications framework that makes the SDOH relevant to everyday people.


"Illustrating with examples like “playgrounds and parks” and “in the air we breathe and water we drink,” makes the concept of social factors more tangible..."

We've included this resource not so much because it relates to male health itself, but because it provides a case study of a service that has actively been through the process of restructing itself to male social health and wellbeing relevant in an everyday context.

This process was clearly not easy, involving a significant amount of time and resources to testing a variety of approaches to making the SDOH approach relevant to the lives of everyday Americans in a volatile political environment.

The Need For A Clearer Understanding Of Health

The research revealed that most Americans responded very poorly to direct use of the common phrasing around Social Determinants. Mostly, they had trouble understanding what Social Determinants meant although it became clearer when it was contextualised.

The research uncovered suitable ways to deliver information that was similar to the SDOH approach that became more valid - for example, instead of "Social Determinants', they found that "Health starts in our homes, schools and communities" was much more responsive.

It became important in a politically charged environment to find ways of communicating health that avoided 'hot-button' issues and to reinforce credibility.

So by starting with a positive phrasing, being specific about the agencies that are providing the information and using a colloquial style with minimal unnecessary information, people started to respond better towards a social approach to health.

This resource could be useful for practitioners to be creative in finding out what kinds of health messages resonate with men and boys.

This is where strategies like engaging family and fatherhood can be useful in driving men's health behaviours, as these kinds of important life events often act as a catalyst towards giving a man a new appreciation of health and wellbeing.

The American framework could also serve as a useful way of educating young males about what health means in order to effect better precentative health outcomes.